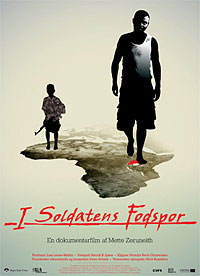 In a Soldier’s Footsteps (Denmark, 2005, Director: Mette Zeruneith, 89 minutes): Truth really is stranger than fiction. When we first meet Steven Ndugga in 1999, he’s a personable and articulate refugee living in Denmark who approaches the filmmakers wanting to have his story told. A former child soldier, he escaped Uganda with his life, but lost his wife and son. Years later, during the filming of this documentary, he receives information that his son is still alive, and is in fact now a child soldier himself. After Steven returns to Uganda to find his son, he disappears. Over the next five years, he reappears and then disappears again, and the story just keeps getting stranger. Like a Graham Greene novel, the film finds the truth elusive, but it makes a fascinating tale.

Article about the film on the Danish Film Institute web site

4 thoughts on “In a Soldier’s Footsteps”