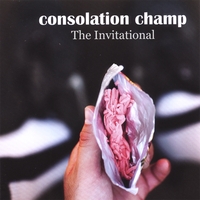 In a bizarre case of art imitating life imitating art, or something, there is now actually a BAND called Consolation Champ! I wonder if they left off the “s” since they couldn’t get this domain name? Most of you know that the name of this site was one of a number of hypothetical band names I tossed around for most of the 80s and 90s, and so I’m actually sort of proud that there is now a bunch of guys out there (in Minneapolis, actually) who are making music under the (slightly-different) name. Rock on, guys and good luck! Go and check out their CD.

I realize that some of you poor typists might have already found this out, actually.

UPDATE: I just checked their MySpace page and it appears that they might be playing SXSW this year. WEIRD! If they are, I think I might just NEED to see them. So strange.