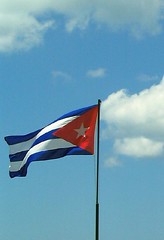 Brooke and I are off early tomorrow morning for eight days in Havana. We’ve never been to Cuba before and thought we should go now before it all changes. We’re not beach people, so we didn’t care about staying at a resort where we wouldn’t be able to meet Cuban people or see what their lives are like. Instead, we’re staying at a casa particular, a kind of Cuban version of a bed and breakfast. After reading raves about them on TripAdvisor.com, we’ve decided to stay with Ana and Pepe in the Vedado neighbourhood of the city. Though they do have internet access, don’t expect me to tie it up posting to Flickr. But when we get back, I’ll likely be posting like a fiend. Wish us safe travels, everyone, and we’ll raise a mojito for you!

By the way, Viva Cuba is actually a very charming recent film from filmmaker Juan Carlos Cremata Malberti. I reviewed it over on Toronto Screen Shots.