Won’t you please talk to me
If you’d just talk to me
Unblock this misery
If you’d only talk to me
— Peter Gabriel, “Come Talk to Me”

Last night, I went to a party. Each year around this time, Lee Dale and Jay Goldman organize a get-together just before South by Southwest, ostensibly for Torontonians heading down. Cheekily-titled Canadian Livers in Training (CanLIT), it’s a boozy, loud, and utterly wonderful time. And that’s coming from someone who’s a bit of a party wallflower. I didn’t have any deep conversations last night. I might have spoken to ten people in a room of about 150. But what it reinforced for me is that life is about connection with other people. I would argue that work should be, too. 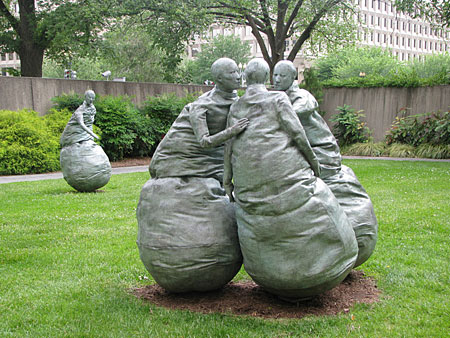 This might sound strange coming from someone who has worked and lived online for the past decade or longer, but I think that as wonderful as computers and mobile devices and the web can be, they have contributed to much more isolation in the workplace. I’ve spent the past few years miserable in high-paying and some might consider cushy jobs writing and building “communities” on the web. Miserable because in the workplace, my day and the days of everyone I worked with consisted of long stretches alone staring at a screen and not actually talking to each other.

This might work for some among us. It’s not surprising that tech jobs are often filled by people with some form of social dysfunction, but I think I’m arguing that our workplaces reinforce and in some cases may even help create that dysfunction. I’ve certainly learned that personally, I need a job where I can spend a significant amount of my day interacting in real space with human beings, preferably smart people. It seems a gross injustice that most of the people who are comfortable around others, those with so-called “people skills” are often channeled into sales and marketing positions, forcing them to use their gifts in the service of selling more crap, while so many other people in the organization look at these folks with a mixture of envy and resentment.

I’m not saying that we should spend our work day holding hands and singing folk songs. Nor am I arguing for more useless meetings. But to me, all of the talk about “corporate culture” is meaningless if we all work alone.

To bring it back to South by Southwest, each year for the past ten years, I’ve been spending a pretty large amount of money and often taking vacation time to make the trek to Austin. Though there are literally hundreds of panels and presentations, I learn more in the hallways between sessions, or over lunch or dinner or drinks with all the smart people I meet there. Humans are social creatures, even the introverts. Somehow, our workplaces have crushed that out of us in a misguided quest for efficiency. I would argue that we’re much more efficient when we’re interacting with each other. Now, how can we make that happen? See that comment box below? Come talk to me…

Thanks to Flickr user cliff1066™ for making his images available under a Creative Commons license. The sculpture is called Last Conversation Piece, and it’s by Spanish sculptor Juan Munoz (1953-2001). It’s in the Hirshorn Sculpture Garden in Washington, DC.

7 thoughts on “Come Talk to Me”