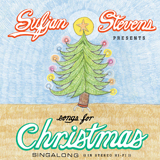 I picked up the set of Christmas EPs by Sufjan Stevens tonight and so far it’s awesome. Most of this guy’s music sounds like Christmas to me anyway, but this is the perfect way to make this jaded old soul think about the stuff buried under all the tinsel and shopping.

These EPs were previously unreleased, but a few songs appeared on some file sharing networks. Basically, every year since 2001 (except 2004), SS has recorded a mix of traditional carols and original Christmas songs (with great titles like “Get Behind Me, Santa!” and “Come On! Let’s Boogey to the Elf Dance!”) and sent it out to friends. Now we’re all his friends. For only $20!

Seriously, this is good!