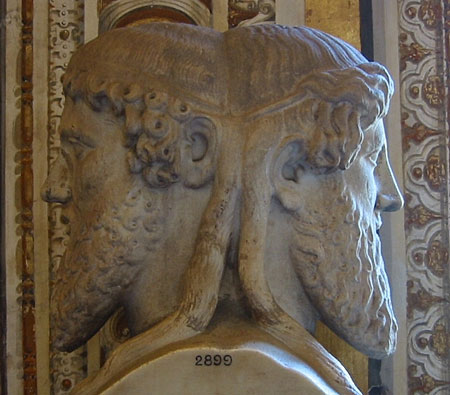 The Roman God Janus, namesake of the month of January
(image courtesy of Wiki Commons)

It might be a cliché to take the beginning of a new year as a chance to take stock or to make resolutions, but I’ve always admired people who do it honestly. This past year, this blog marked a decade of existence, but it’s been growing quieter and quieter, and I’d like that to change. When I began my other blog, Toronto Screen Shots in 2007, I fully intended to keep blogging here for more personal stuff, but the rise of Twitter and Facebook seems to have taken over the realm of the personal, at least for the quotidian stuff. And although I’ve been meaning to use this space for lengthier more contemplative writing, I’ve frankly become a bit spooked, mostly due to my work experiences with “social media.” It’s hard to be honest about your life when you can’t talk about the thing you spend most of it doing, which is going to work. As someone who thinks about the world of work constantly, and who seems to change jobs just as constantly, I’ve tried to put a few of my thoughts about that here, but have had to be less than candid at times. I hope that might change a little bit. And as for the personal, I’m hoping to use this blog as a bit more of a place to examine myself and my life. For those few of you who might still read this blog on a semi-regular basis, thank you and I hope you’ll stay with me on this hopefully-not-too-narcissistic journey.

As I look back on 2010 and forward to 2011, the phrase that comes to mind is “contentment in the midst of uncertainty.” I will turn 46 in February and am now closer to 50 than I am to 40. It really is true that time seems to speed up the older you get. It’s very strange to see all the grey in my hair and the lines forming on my face when inside I still feel like the geeky teenager I used to be. And yet even as lots of things change around me, I am pretty happy most of the time. The obvious reason for that is Brooke. We’ve been together for 13 years now, married for 8 and although marriage isn’t easy, and we don’t take anything for granted, we have a pretty stable and low-maintenance relationship. She’s remarkably tolerant of my faults and still laughs at my jokes. She’s easy to be around, and even as I age, she seems as young and beautiful as ever. I don’t want to make it sound like we have a perfect marriage. Both of us have made significant sacrifices to be together, and my life is not at all what I imagined it would be when I was younger.

I miss having children, and letting go of the idea of being a father was very hard for me. It’s only been in the last year or two that we have pretty much released the tension that used to exist between us on this subject. But Brooke was honest with me from the start. Her ambivalence about parenthood never wavered and time finally made the hard decision that we never quite could verbalize. I think I would have been much more comfortable if either of us had siblings. As it stands, we live in an eerily child-free world. A dog is certainly in our future, though.

Each of us has only one surviving parent. Brooke’s dad died in 2007, and my mother way back in 1987. This past year has been exasperating at times as each of us struggled with our emotionally needy parents and realizing we’d become parents to our own parents. My dad is just 68 but as a heavy smoker has started to lose his health. He’s developed a troubling wheeze that probably means emphysema but he’s too stubborn (or afraid) to go to his doctor. Brooke’s mum is in good health but is 75. So, sometime in the next 5-10 years, it’s likely that we’ll lose one or both of them.

My career has always been a source of uncertainty, and for that I must take full responsibility. I’ve just never found that perfect fit, and although I’ve enjoyed the wide range of environments and industries I’ve worked in, it might be nice to finally settle down. My current job is a contract that will run until September 2011, and I have no idea whether I’ll be moving on again or if it will be renewed. Since 2007, I’ve had five different jobs. While that might be fine in one’s 20s, I get a bit nervous now going for interviews.

2010 was certainly a learning experience on the career front. Working on the front lines of film distribution was wonderful, but I realized how hard it is financially for a small independent company to survive in the face of competition from larger corporations. And going to work for one of those larger companies turned out to be very unappealing. My choices were to remain in a job where I worked 3 days a week with no benefits or to look for something more lucrative but potentially less interesting. I’ve now added health care and the film industry to the list of sectors in which I’ve worked (internet services, financial services, computer retail, web design, wine!) in the past decade. And I’m discovering that my core skills are essentially about communicating online. I hope that will continue to lead me in interesting directions in the year and years ahead.

Moving from the thing that takes up most of my time to the thing that actually means the most to me, 2010 was both good and bad in terms of friendships. The year began with my dear friend Brad Graham suddenly passing away at the age of 41. My tenth annual pilgrimage to SXSW was particularly poignant since that was where I had met Brad in 2001, and it felt like a bit of the personal web died with him. Keeping this blog going is an attempt to fight that creeping feeling that nobody can be themselves anymore online. Nobody was more himself online than Brad, and I plan to honour him by trying to be more of myself here as well.

It wasn’t all doom and gloom. SXSW was still a highlight, where I got to reconnect with old friends and connect with new ones. And locally, I made new friendships and deepened older ones within my circles of friends, both small (I’m lookin’ at you, SuperNerds®) and larger (film bloggers represent!). I’ve always been relationship-focused and if I happen to be more vocal about my friendships this year, I hope you won’t mind. In my own low-key way, I try to bring people together and nothing pleases me more than being a kind of matchmaker and then seeing sparks (creative, romantic, whatever) fly between people I’ve introduced.

Well in typical rambling personal blog fashion, I didn’t really know what I’d end up writing and now here I am trying to sum up. Here are some things I want to do in 2011, in no particular order.

And before I end up sounding like a motivational speaker, I’ll stop. If you’ve made it this far, thanks. And I wish you a very good 2011!

3 thoughts on “Looking Back and Looking Forward: 2010 Edition”