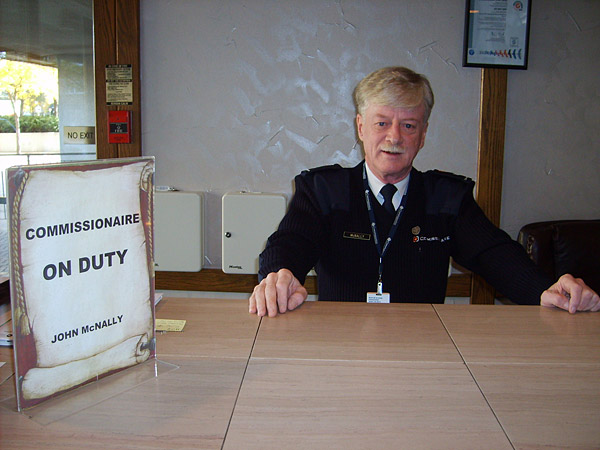 As you know from my last post, my Dad became seriously ill about a month ago while on holiday in Ireland. Luckily, he was visiting his brothers and sisters and they made sure he had the best medical care possible. On the day he was admitted to hospital, my uncle later told me, the doctors didn’t give him much of a chance. But over the next few days, he made a remarkable recovery and was released from hospital in time to make his originally scheduled flight home. When he got home, I met him at the airport and we talked about a plan for continuing his recovery: staying on the nicotine patches and off cigarettes, seeing his family doctor and a respiratory specialist as soon as possible, and seeing about getting oxygen for him at home.

Those first few days back were actually pretty great. His appetite had returned with a vengeance, and being off the smokes, he could actually taste his food again. He was eating three meals a day, which was two more than he had been eating in recent years. He was diligent about his nicotine patches, and handled any psychological cravings by popping a hard candy when he would have been reaching for a cigarette. I was proud of him. His own doctor saw him a few days after his return, and scheduled an appointment with a specialist for today. Toward the end of last week, I was speaking to him on the phone and he mentioned he had no energy to get up and do household tasks. He asked if I could call his doctor to see if we could do anything about the oxygen. She told me there really wasn’t anything other than to reduce his activity level and, if things were really bad, to go to the hospital.

I planned to visit on Sunday so we could order in some lunch. When I arrived, though, I was pretty shocked to see how much he’d declined in just a week. Brooke and I had been there on the previous Sunday and although it took some effort, he cooked us a full dinner. We didn’t end up having lunch; he had no appetite at all. I did take out his recycling and garbage, change the cat’s litter, and go and do some shopping for him, but even when I returned with a cooked chicken, he didn’t want any. He hardly moved from the couch at all. When I asked him if he was okay, he said he felt absolutely fine, except that he had no energy. He wanted me there while he took a shower in case he felt weak and fell, but he didn’t end up showering. He said he’d sit in the tub and run the shower later. I thought about taking him to hospital, but wondered if sitting in the Emergency department for hours would just make things worse. He assured me that he’d be fine for his Tuesday specialist appointment, and that he’d even be driving himself there. I left telling him I’d accompany him on Tuesday and that I’d call him at lunchtime on Monday.

Brooke was coming home from a weekend away at a running event in Pennsylvania, and for whatever reason, I couldn’t fall asleep at all that night. On Monday morning, I decided to ask my boss if I could work the next two days from home, just to be closer in case Dad needed me. I was mentally and physically exhausted after seeing him on Sunday as well, and tried to have a short nap around midday. I called him around 11:45am and got the answering machine. Thinking nothing of it, I left a message. I called back around an hour later and got the machine again. Thinking back to Sunday, Dad had said he might have to visit an OHIP office to see about getting the bill for his hospital stay in Ireland looked at, but I couldn’t imagine him having the energy to go out on his own. I tried not to panic. But after calling back every hour until 4:00pm, I called Brooke to let her know I was going up to see what was going on.

I have another memory of doing the same thing a few years back when I couldn’t reach him, and it turned out he was in his bedroom playing one of his favourite computer games with the sound way up. He just hadn’t heard the phone. But this time I knew it was different, and I was preparing myself for the worst. I was particularly terrified I’d find him in the bathtub with the water running. Since I hadn’t spoken to him since the afternoon before, I had no idea what had happened. When I got to his place, the television was off and the doors to the bathroom and bedroom were closed. That’s normal routine at night so the cat doesn’t bother him.

I decided to open the bathroom door first, just to make sure he wasn’t in there. Not seeing anything amiss, I opened the connecting door to his bedroom and saw him, curled on his side just next to the bed. It looked like he had just gotten up first thing in the morning and then collapsed. I can take comfort, I suppose, from the fact that it was sudden, and it didn’t look like he suffered. But it was still a shock. We all thought he had a few years left.

This post is in no way meant to eulogize my father. That will come later. But for those who know me, it will explain why I’ve been scarce for the past few days, and will be for the days ahead. Arrangements have been made, relatives have been contacted, and the next little while will be a little bit of a blur. That’s good. I suspect that I’ll only really feel the impact of the loss in a few weeks. Then I can write more about what my Dad meant to me.

Here are the details about the memorial service, in case you’re interested.

We’re asking that in lieu of flowers, you might make a donation in my father’s name to the Canadian Lung Association. There is also an online guestbook here or you can make a comment or share a story using the comment box below.