I’ve been shuffling some old papers around recently and came upon the following. It was written in March 2003 as preliminary research for a panel I wanted to moderate at SXSW 2004. I got interesting responses from Bruce Sterling and Clay Shirky, which I might include if there’s interest.

Dumb Mobs, or Keep Your Epinions to Yourself

It was only a matter of time. As more and more of us got online and started to join communities, we began to share our opinions. We became a marketer’s dream, allowing them to gather our most detailed demographic data every time we made a purchase or joined a Yahoo! group. Companies like Amazon began to let us write “reviews” of our purchases and recommend things to others. With a user base of several million individuals, these databases have begun to act as our critical voice whenever we consider an online (or offline) purchase. But how good is the information we receive this way? Will this sort of “mob ranking” replace the advice of trusted sources, and if not, how will these trusted sources establish themselves online? Will it become more difficult to find good information in the flood of online ratings? What kind of forces are at work here? These are the questions I propose to explore.

I was prompted to ask some of these questions during a panel on book publishing during this year’s South by Southwest Interactive conference. The moderator had been talking about how the marketing and promotion of books had moved online, mostly due to the web’s reach and the reduced costs involved. I began to think of the way that the critic’s role had also moved online, though not in the way I’d hoped. Sure, people still brought up the New York Times online and some of them even read book reviews there, but more and more sites were adding their own ratings engine and just letting everybody have at it. Something about this made me uncomfortable and I wanted to find out why.

I have participated in this kind of critical activity myself. At the Internet Movie Database (www.imdb.com), users can rate a film out of 10 and write their own reviews which are then added to the site. A bit of a film geek, I’ve endeavoured to rate every film I see, whether it’s a masterpiece, a flop, or just an entertaining bit of fluff. Upon reflection, I think that might be the only way these sites will work. Just as a professional critic must write reviews that fall across a wide spectrum of opinion, each voter on IMDb or Amazon or Epinions must establish the boundaries of their taste. In the case of product reviews, where taste is not an issue, the critic still must establish their standards. Without informing anyone of what we don’t like, sharing what we do like will be meaningless.

However, my experience with these sites shows a different situation. Some users vote only for things they do like. These people would have an average rating that is quite high. Others only point out things they hate, and so their average ratings are quite low. As individual voices, we might be wise to ignore them, but as part of an anonymous mob, they are invisible. We don’t even know how many of them there are. The larger question is how do we know we can trust the ratings presented by a site that doesn’t limit its membership in any way? Sure, it’s democratic, but when it comes to informed opinions, the mob surely doesn’t rule.

Since the machinery behind these databases is hidden to us, I wanted to ask a few experts how they work. Is one better than another? What kind of research is being carried on into making them more useful? Will it really ever be true for me that I will weigh the opinion of the New York Times’ book critic against the mob of user ratings at Amazon and find them equal?

Let’s take Epinions as an example. When I ask it to list dramatic movies in order of rating, I get a very long list of 5-star choices. But I’m almost certain that the people who gave Schindler’s List the top rating were not the same group that elevated Anne of Green Gables to the same lofty place. I can’t be sure, but I’m trusting my gut on this one. I would hazard a guess that most people who take the time to rate their purchases online are a self-selecting group whose opinions tend toward one end of the spectrum or the other.

The interesting thing is how much more influential these algorithms have become, and how opaque they remain. Google’s search algorithm is the big one, but recent stories about the “black box” that is Yelp are also relevant. I wonder if a discussion of these issues might still be interesting, or has the issue already been settled?

At a local “Geek Lunch” a few weeks ago, I had the pleasure of meeting Ben Lucier, a genuinely nice guy who works in the telecom field. But a big part of Ben’s non-work time is devoted to the Little Geeks Foundation, an organization established to help provide computers to underprivileged kids. I’m delighted to share the news that on June 12th, Ben and the Foundation will be giving away 100 refurbished PCs to children and their families.

Ben says it’s just the first of many planned giveaway events, since the Foundation’s goal is to give away 1,000 computers by the end of 2008. Bravo, Ben, and Go Little Geeks! It’s only a little sad that the computers are running Microsoft Windows. 🙂

Forgive the possibly offensive title of this post. I’ll explain. I attended the first day of the Mesh 2008 conference today here in Toronto. This is a brand new conference for me, although it’s now in its third year. Although I have online and offline relationships of varying degrees with perhaps a dozen people who were attending, I still found the “networking” to be incredibly stressful. In fact, at lunch, I bailed completely and went off to eat on my own, despite the fact that there was a free catered lunch available at the MaRS Centre, the conference venue. It felt too much like the first day of high school in the school cafeteria for me. So you’ll know where I’m coming from when I talk about one of the sessions I attended.

CBC Radio’s Nora Young hosts a radio program called Spark! and her session was being taped for later broadcast as a show. She spoke with Microsoft researcher Bill Buxton on the subject “Does Location Matter?” which I thought would be about the benefits of telecommuting. It turned out to be mostly about the advances in video conferencing software and how to use it to work and socialize virtually with our colleagues and friends. It was fascinating stuff, but I was hoping the conversation would be broader.

We interact in a variety of ways with others online, but it’s mostly in the course of doing several other things at the same time. I can post a Twitter message, comment on a blog, and carry on an IM conversation all at the same time, possibly interacting with three different people, while at the same time writing in Microsoft Word or working with an image in Photoshop. I call these “micro-interactions” because they usually involve very little time, and are usually quite focussed on a particular subject or question. I’m reacting to a specific thing the other person has posted, for instance. These interactions have a defined purpose and they require little etiquette because online, interruptions can be dealt with later.

I’m finding more and more, though, that when I meet some of these same people offline, I’m finding the interactions more difficult. The idea of giving or getting “full attention” seems a bit overwhelming. I often fear that in offline situations, we won’t have enough conversation to keep things running smoothly. I also dread the awkwardness of introductions and departures, and knowing how long to just “hang around.” These are all non-issues with people I’ve met and known offline, because there is established etiquette. But I find that the more we interact online, the more awkward we get when we can’t interact the same way in the physical world. Among even good friends whom I’ve met online, our face-to-face interactions can sometimes feel awkward. “Just hanging out” can be difficult without some issue or topic to focus our energies toward.

Paul Collins tells a funny but illuminating story in his book Not Even Wrong: Adventures in Autism. He describes a speaking engagement at Microsoft in which the heads of more than half the audience are down over their laptops, a scene familiar to many conference speakers nowadays. When he asks what’s going on, his host tells him the audience members are watching the streaming video broadcast of the very talk they’re attending. It’s joked that many web geeks are probably mildly autistic, and that their legendary social awkwardness may actually be symptomatic of Asperger’s Syndrome, but it’s not really a joke.

The incidence of autism in general is rising rapidly; some statistics say it now affects one in 100 births. It’s interesting to me that the number is rising just as more and more of our social interactions are moving online. If I’m finding my own feelings and confidence around social interactions changing, I wonder how it will be for the generation of children who are growing up with the sort of “micro-interactions” I’ve described earlier?

Now all of this could just be unique to me. Maybe I’m just having a bad day socially. But I’m glad that it forced me to think about some of these issues. I’m very curious to see what others think about this. Feel free to comment below, or should you see me wandering around at Mesh tomorrow, by all means stop me. At least we’ll have a defined topic to discuss. 🙂 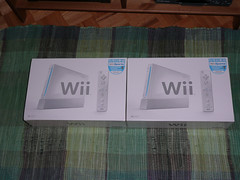 I bought two Wiis on Friday. One is for me and one for a friend. There were only five in the whole store!

I’ve been a very bad runner of late. Brooke and I started running to keep fit back in 2003, and for the first few years, I was motivated. One of the tools that helped me was a great heart-rate monitor watch I bought from Sports Instruments. That watch is now on its last legs, and it’s time for some new gadgetry to help get me back on track, so to speak.

I’d always loved the Garmin Forerunner series of GPS-enabled watches, but they were enormous and ugly, and often didn’t work in the city, where tall buildings interfered with their ability to pick up a signal. I kept telling myself that when they got smaller and more capable, I’d pick one up. I believe that day is now at hand. Behold the Forerunner 405:

This thing will do everything: track distance, time, map routes, even heart-rate (on one model). Best of all, it can upload its data to the web, where you can analyze it or compare yourself with others on Garmin’s new Connect community.

This is exactly the sort of tech geekery that gets me excited and motivated to exercise more. There are only two notes of caution here. One is that there won’t be any Mac support for the 405 until November 2008. The other is that Apple has long been rumoured to be working on a much fuller implementation of the Nike + iPod kit. While it’s doubtful that Apple could build something as sophisticated as the Forerunner (though it would play music!), I might still try to wait a while. Although I’m sure I could use Windows under Parallels for a few months to sync my data with my iMac, there could be some potential hiccups.

Don’t be surprised if I go out and buy one this weekend, though!