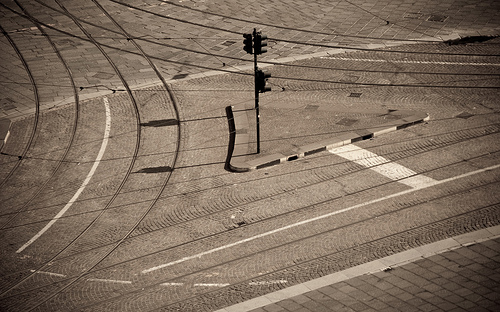 As I write this post, I’m sitting in a San Francisco café in the midst of my third “career retreat” in the past eight years. For someone who thinks about the world of work so much, I don’t seem to be very good at figuring it out for myself.

I left my position at St. Michael’s Hospital just over a month ago, six months into a ten-month contract. Without getting into too much detail, I was unable to work effectively within such a large organization, with all of its existing power structures and areas of dysfunction. Plenty of people do, but I’ve just realized (again) that I’m not cut out for working in bigger companies.

I’ve been working for money for more than 30 years now. I took my first job in the summer of 1980, selling magazine subscriptions door-to-door. Since that time, the longest I’ve ever held a job has been four years, and that’s been on two occasions. From 1994-1998, I was a welfare caseworker for the City of Toronto. And from 2003-2007, I was the web guy for Lifford Wine Agency. I enjoyed both jobs, but left for similar reasons. I was worried about stagnating. I’ve come to realize that when it comes to work, I have a fear of commitment.

It hasn’t helped that for the past decade, I’ve been working in web-related positions. The online landscape shifts so often as to make just about anyone insecure. I’ve always been happiest as a generalist, but each job I’ve taken in the past few years has pushed me to specialize more and more. I’ve learned a lot about what I don’t like to do in the process. What’s been harder to nail down is what I do like to do.

And so I’m here, spending a week away from my regular routine, reading, thinking and writing about what I want to do with that part of my life devoted to earning money. I’ve tried to be unsentimental about work. My generation may have been the first raised to expect more from our careers, not just money but fulfillment. I’ve always thought that was a tall order. And yet.

We spend half of our waking hours working. We often see our workmates more than the members of our own families. We should be looking for an environment in which we can use all of our abilities and develop good working relationships. We should be able to balance our work and home responsibilities with as little stress as possible. Let’s face it. I’m still an idealist.

Everywhere I have worked, I have diagnosed areas of dysfunction and lamented relationships that just didn’t work out. I’ve often thought that I would make a good manager, but without the power to actually make organizational changes, I know I’d grow bitter and frustrated.

I’ve often joked that entrepreneurs are people who just can’t work with anyone else, and now I feel like I understand that mentality.

Over the past eight years, on my career retreats, I’ve compiled lists of my skills. I’ve read about flow. I’ve tried to combine my passions with my abilities. I’ve created non-existent positions and then sold companies the idea of hiring me to fill them. So why am I still back in this position, unemployed and looking for my next gig?

I’m 46 years old. I like to think that I know myself pretty well. I like to think that the income matters less than the opportunity. That I’m ready to take on new challenges, again. But I worry that others will see me as a job-hopper, as someone who’s never stayed in one place long enough to achieve mastery or to assume responsibilities. As someone who is afraid of commitment.

I often compare the world of work to the world of relationships. And I worry that I’m that guy waiting for “the one” to sweep me off my feet. And I’m perpetually disappointed. And worse, it’s not possible to take a break from working the way one might decide to take a break from dating. We need to work all the time, and when we’re working it’s hard to find energy to find better work. So many people muddle on in jobs they hate. Except me. I get out.

And as each position I leave is found wanting, I worry that I’m running out of options. Who wants to hire someone so unsure of what he wants out of his work?

So this week is about me remembering my experiences, recalibrating my expectations, rethinking my ambitions and researching my options. God help me.

Thanks to Daniele Sartori for making his photo available under a Creative Commons licence.