I hate the idea of New Year’s resolutions. And yet, I think I have to make one.

I rarely (if ever) talk about work on this blog. And that’s by design. But I want to talk about what I do rather than just where I work. For years, I’ve hidden behind the adage that I’m a “generalist” as far as working the web goes. In fact, I’m pretty much a generalist at everything. I’m curious about everything and very easily distracted. I have a million hobbies and interests, and my spare time is very easily filled up.

But this year, I want to focus a bit more on my work as a web designer. I’m not a designer, or a programmer. I often just call myself a “web guy” and that’s true. But the truth is that most web guys know much more about the web than I do. I recently read Jeff Croft’s entry on being a professional web designer and it really struck home. I’m one of those guys who learned HTML in the 90s. I’ve kept up, barely, with most new developments as far as markup (ie. not programming) and the general “zeitgeist” of the web. I know the right buzzwords, and am genuinely interested in where the web is headed. But my technical skills and knowledge have lagged.

My current job started in 2003 when I had to build a site from the ground up for a wine-importing agency. It’s gone through a few cosmetic changes since then, but nothing serious, and it is crying out for a proper database back end and a CMS. These are at present beyond the scope of my abililities. I’ve bought the right books, and bookmarked the right sites. But my current responsibilities have gradually expanded to the point where I can’t immerse myself enough to learn how to do these things.

Each year I come back from SXSW inspired and motivated to make the necessary changes, and each year, I fail to make them. I’m frustrated. Part of the problem is the fact that I do much more than just maintain the web site now. And part of it is just inertia. No one complains about the site, but I know what’s wrong with it. As the only web guy in a small company, I’m also very isolated from the web design community. Though I know several people and get together pretty regularly for drinks with them, I’ve assumed they’re too busy to help with my questions. I’ve wanted to get more involved in the local web design community, but have lost the confidence that I’ll be able to contribute anything of worth to the discussion. Same goes for SXSW, where I hang out with bloggers and journalists and other “content” types instead of trying to learn from people whose work I admire online.

It may be true that in the long run, I’ll always be more comfortable as a content guy. My real passion is for writing and for using the web in innovative ways. But that doesn’t mean I’m incapable of learning a few new tricks. In 2007, I’m going to try very hard to make space for that to happen.

I’ve been back from SXSW Interactive for more than two weeks and yet I still haven’t posted my thoughts. The reason? Well, I wrote something that was very negative and I’ve been sitting on it. I’m going to post it now, unchanged, but I will add that my malaise seems to have been shared by a number of people. And it appears to be affecting a number of conferences, not just SXSW. I heard a lot of complaints that ETech wasn’t so great this year, for instance. And tech conferences seem to be sprouting up all over the place like weeds. All part of the new “Web 2.0” bubble, I suppose.

But before I post my depressing screed, I will say that I managed to have a pretty good time nonetheless. It’s just too bad that I only get to see some of these amazing people just once a year. For evidence of my merrymaking, check out my photos on Flickr. I’ve posted my photos from 2001 and 2002 on there as well. Ah, nostalgia!

Read on if you dare…
END_OF_DOCUMENT_TOKEN_TO_BE_REPLACED 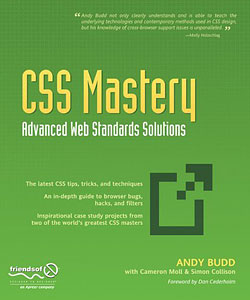 My review of Andy Budd’s new book, CSS Mastery, has been posted over at Digital Web. Enjoy!

Yorkminster Park Baptist Church is the church Brooke and I attended for about four years. We were married there in 2002, and even though we’ve been going somewhere else lately, I still serve on a board there and until recently, had been their webmaster.

One of the first things I did upon agreeing to update their web site was bring in my friend (and one-time boss) Jay Kerr to undertake a badly-needed redesign. Ten months later, I’m happy to say that the site looks fantastic, navigates well, and validates. Jay used Movable Type as a lightweight content-management system so that church staff and volunteers can make their own updates and have a proper archive of past events.

The redesign even got a mention from Anil Dash on the SixApart Professional Network. Bravo!

In the course of my research for work, I’ve visited a lot of web sites of winemakers and importers. Quite a few of them really stink. Lots of them are ugly, and some of them just don’t work well, especially if you use a Mac.

On the site for Michele Chiarlo, who make very fine wines, the left navigation menu is built with Java (no, not Javascript, but Java). Though it works in Windows, on a Mac using Safari it shows up with a large red X.

Elena Walch, another great winemaker, has a system of Javascript menus that wreak havoc. Again using Safari (and Firebird), I can roll over the menus, but as soon as the submenus appear (under Wines, for instance), they disappear if you try to select something. I was able to use Opera to navigate to them, but it was still awkward (I had to click on Wines, which seemed to make the menus remain on screen long enough to be clicked).

What gives, webfolk? The site I’m designing will not work this way. I was actually intending to avoid Javascript entirely, but it is in use for the tasting notes (which are pop-ups). I almost don’t care if the site is ugly, as long as it works correctly in every browser.